The recent video by David L. Jones from the EEVBlog on VFDs has inspired me to look in my junk box – I knew I had an old VFD in there. By old I mean really old – I have bought it around 1999-2000 in Munich from an electronics surplus store, along with a few other things. The module came with no documentation and there is nothing available about it online neither, so it sat in my part box for years. Until now …

The VFD in question is a module that was likely meant for a customer display of a cash register. There is a label “VFD 240W.401” on the backside of the PCB, otherwise there are no other markings apart from “VFD 240 rev 4.0” etched on the PCB (not silkscreened) and a few stickers with what are likely serial numbers.

The display has two lines, 40 characters each, each character is a 5×12 matrix. The board has two connectors, one 46 pin 0.1″ spaced female header and and one 9 pin right angle header. The back side reveals 4 identical OKI MSC1162A chips and a small daughter board with an inverter circuit. The date code sticker on the inverter seems to be showing 45th week 1997 – 18 years old! 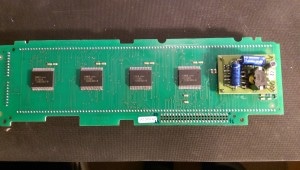 VFD module, back side

A good introduction to how a VFD works is available from Newhaven Display. However, there are a few issues that are not mentioned there. A VFD is basically a multiple triode with a directly heated cathode. Triode is a type of vacuum tube with 3 electrodes – cathode, anode (also called “plate”) and a grid. The cathode is heated by a passing current and emits electrons. Those are attracted by a positively (relative to the cathode) charged anode. In the case of a VFD, the cathode is in a form of very thin wires stretched above the segments, they can be seen glowing faintly in the dark when the VFD is powered. The anode is usually a single segment – in the case of this VFD, each anode is one square “pixel”. If the electrons emitted by the hot cathode hit the anode, they will trigger phosphorescence and the anode glows with the typical blue-green color.

Googling “VFD 240W.401” reveals very little – only an old post on a German language forum that reveals that some other people were trying to make this module working. However, there are a few  bits of important information there:

In comparison to the VFD used by David L. Jones in his video, this VFD is a lot more primitive and more complicated to drive. There is no MCU that could take ASCII codes and generate the signals required for the multiplexing of the display. The datasheets for the OKI MSC1162A chips reveal that they are only 40bit shift registers with high voltage outputs designed for driving VFDs. No “smarts” here, all pixels have to be driven “manually”. The shift registers operate from 5V using TTL levels. The important pins required to drive them are:

Buzzing the pins of the shift registers out with a multimeter revealed that 3 are chained together, forming a 120 bit shift register. The 4th chip is separate. The 120 bit chain drives the anodes (pixels) and the 40 bits in the second register control the grids of the characters, two characters at a time, one in the upper and one in the lower row. 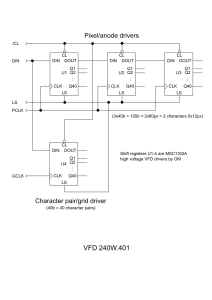 The schematics reveals some complications. The DIN lines for both the “pixel” chain and the grid register are tied together, so care needs to be taken of the level on the DIN pin when advancing to next grid in order to avoid activation of the wrong character “cell” (two vertically adjacent characters sharing a common grid). The LS latch line is also common, so the same issue applies.

Buzzing out the large 46 pin connector reveals the pinout below. Some pins are repeated on the connector for unknown reasons, the pins with no labels are either not connected or have an unknown function. They are not really important to the functioning of the display, though. The smaller 9 pin connector seems to be terminated using a resistor array, but it isn’t connected to the shift registers, so its function is not known neither.

In order to hook up the display to my microcontroller board I have built a “connector” by soldering a few pins to a piece of stripboard. This fixture is better than using loose jumper wires because it ensures solid contact and avoids the need to fiddle with cables while the VFD is powered up, risking a short with potentially nasty results (there are lot of naked pins with 65V on them!). The signal lines have loops of thin wire soldered on the strips, these are used for attaching scope or logic analyzer probes. 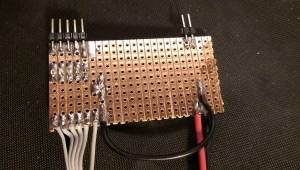 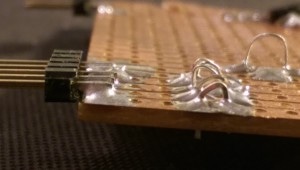 Detail of wire loops for probes

The shift register pin mapping is a bit odd and it took me a fairly long time to work out. Each line of the character cell is 5bits (there are 5 pixels) and the bits alternate between the top and bottom character of each cell (two vertically adjacent characters). So the first 5 bits pushed into the register control a line from the top character and the next 5 bits control a line from the bottom character. The next 5 are from the top one again and so on. The data start at the bottom-most line (intended for a cursor?) and then continue from the top to bottom. The final data packet is 15 bytes (= 5x12x2 = 120bits, 120/8 = 15), sent in MSB first.

The following table shows the mapping of a pair of 5×12 characters into the 15 bytes of the data packet. The table also shows how the pixels map to a font where each character is stored as 12 bytes, with the pixels in the upper 5 bits.

In order to quickly test the driving of this display from a microcontroller I have used an Arduino NG board to prototype a simple example. Controlling this VFD is fairly CPU intensive because it has to be constantly fed with quite a lot of data in order to achieve decent refresh rate without flicker. The shift registers are able to work up 4MHz for a good reason! The minimal 30Hz refresh rate requires: 40x15x30 = 18000 bytes/second, that gives 144kbps sustained transfer rate as a minimum, counting with probably at least double to achieve 60Hz is a good idea.

The sample code implements two techniques how to drive the display, switchable at compile time using some #ifdef macros. One bitbangs the individual lines of each character, working in 5bit blocks. This works, but it requires a lot of CPU time. The advantage is that it results in smaller, more readable code.

The second version uses the SPI peripheral. Because SPI on AVR can work only in 8 or 16 bit words, it is necessary to pre-pack the character bits into a buffer and then transfer that at once. This is faster, in case of using interrupts (not implemented in the example) it would give a chance for the MCU to do something else while the display is being refreshed. The disadvantage is a large pile of bit shifting and mangling code that is hard to read and takes a lot of memory.

The code was tested on both Arduino NG (ATMega168 @ 16MHz) and Arduino Mega 2560. In both cases it is necessary to change from using digitalWrite() function to direct register access, especially for the bitbanging code, otherwise the code is way too slow to achieve a decent, flicker-free refresh rate.

This is how the VFD looks running the demo program: 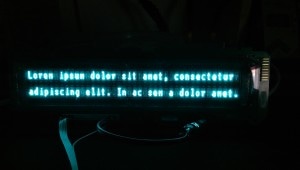 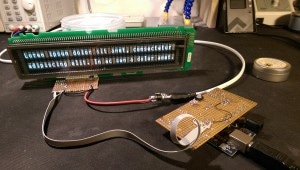 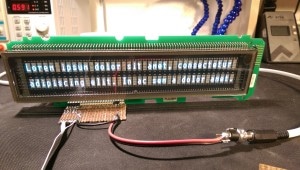 And the current being drawn by the display alone (the Arduino is powered from USB) – that’s 600mA right there! 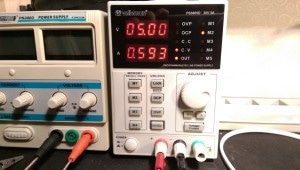 All in all, it was an interesting learning experience.The VFD looks great, unfortunately its high current consumption, relative fragility and complicated driving make it not very easy to use. In order for this module to be really useful it will likely be necessary to implement a dedicated controller, offloading the display handling from the main application processor. Probably some sort of “backpack” emulating the functionality of the popular HD44780 controller could work nicely. More modern VFD modules from Noritake took exactly this approach, providing a drop-in replacement for the popular character LCD modules.

Finally, the information here is provided as-is, with no guarantee of correctness. I did work for me and I hope that this information will prove useful to someone, but don’t blame me if your module doesn’t work or the magic smoke escapes.